The first was "Flamena" - a work in which the artist completely lost himself and gave it its form in just three days. It is a sculpture made of alder wood, characterized by flowing shapes referring to the fire. Flames here imitate the urge to destroy the former period and build a new life. At the same time, they express the destruction and rebirth of something better and more beautiful.

"Suprema" is another work by Mariusz Kumor made with the intention to exhibit his own visions in a different manner as compared to his previous works. It is a wall panel that is a reference to the art of painting, with which the artist experimented, looking for the best form for expressing the message and emotions.

"Folium" (the so-called "Descartes leaf") - is another work in the artist's output. The sculpture is the effect of the need to join two different structures into one, such as concrete and wood.

„Strażnik” is another piece of work, made using metal and concrete. The combination of these two materials is the next stage of configuring seemingly cold structures. In the initial stage of the creation of the sculpture, the inspiration was the letter "S", which symbolized Strength and Stability.

Sansa - is a massive concrete block that holds a delicate wooden sail.. 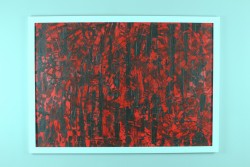